Kenko-san guides you on a treasure-hunting tour around the shrine town. 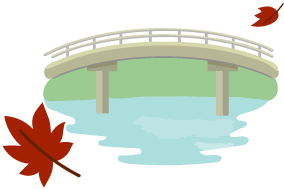 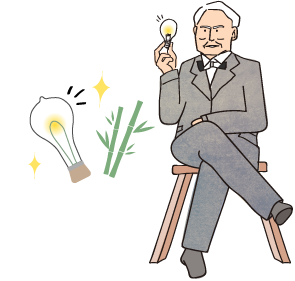 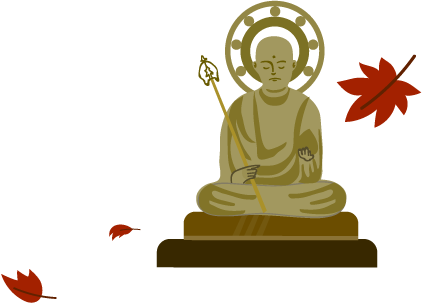 Hello! I am Yoshida Kenko.

Do you know my essay Tsurezuregusa?
In the essay is an episode about a Buddhist priest of Ninna-ji Temple, who set off alone on a pilgrimage to Iwashimizu‐Hachimangu Shrine.

The funny episode tells that, satisfied with just seeing the hustle and bustle of temples, shrines and the then shrine-temple town at the foot of Mt. Otokoyama, the priest failed to visit the Hachimangu, his intended destination.

The city of Yawata has developed as a town within the orbit of Iwashimizu‐Hachimangu Shrine dedicated to both Shinto deities and Buddhas.

The city may be the home of the spirit of Japanese people, many of whom have both a Shinto altar and a Buddhist altar at home.

About 700 years after my time, the city looks completely different from then. There were the times when Buddhas were separated from Shinto deities, and many Buddhist buildings were destroyed. However, the shrine town is still dotted with valuable treasures that evidence the spiritual roots of Japanese people.

Oh, yes. The before-mentioned episode in Tsurezuregusa concludes that a guide is desirable in everything. Today, I will guide you on a treasure-hunting tour around the shrine town.

The shrine-temple town turned into a sea of flames due to a battle between the shogunate and the new Meiji government 150 years ago.

Buddha statues and objects housed in a large Buddhist temple building, which was located in front of present-day Iwashimizu‐hachimangu Station, were moved for refuge. Soon after that, the Meiji government issued the Edict for Separation of Shinto and Buddhism. A huge number of pagodas, Buddhist temples, and Buddha statues on and at the foot of Mt. Otokoyama disappeared in just a few years.

Nevertheless, local people at that time moved some Buddhist items to other places to protect them. That’s why the present-day shrine town at the foot of the mountain is dotted with Buddhist items.

The statue of Hachiman Daibosatsu enshrined in Zenporitsu-ji Temple was previously worshipped in the precincts of Iwashimizu‐Hachimangu Shrine.

The statue is said to have been the main object of worship. It looks like a jizo statue, but is a statue of the deity. Tradition says that the main building of the temple was constructed with materials formerly used for the Hachimangu.

This temple is commonly called “Momiji-dera” (Maple Temple). Its beautiful garden is a must-see spot.

Shobo-ji Temple houses a five-meter-tall, huge seated statue of Amitabha. This statue was previously enshrined in the Hakkaku-do Temple, which was located next to the main hall of Iwashimizu‐Hachimangu Shrine.

It is said that this statue and the Hakkaku-do Temple were relocated on the Nishikurumazuka Tumulus in the early Meiji era.

How surprising a move to the top of the tumulus is!
That suggests that people at that time tried hard to protect the hall and statue.

Shobo-ji Temple has an interesting story.

There was a young woman named Okame at the temple in the Edo period. She was upset with a daimyo’s procession passing by, and lifted a tub with a bathing child and the water in it. A samurai fell in love with the woman with strong arms at first sight, and proposed to her. Surprisingly, this samurai was the then shogun Tokugawa Ieyasu!

A son of Okame founded the Owari branch of the Tokugawa clan, one of the clan’s three main branches, and became the lord of Nagoya Castle, which is famous for shachihoko. Shobo-ji Temple’s current main hall built by order of Okame clearly shows how the colors painted on the hall looked in her time.

A large number of Buddhist temples, called “the 48 temples of Mt. Otokoyama,” formerly stood in rows on the mountain where the Hachimangu is located.

Among the temple buildings, only the Shokado cottage and the Shoin building of Izumi-bo Temple currently exist in Yawata City.

These elegant-looking buildings are truly treasures of the Hachimangu. They are reconstructed in Shokado Garden. Why not visit and observe the genuine historic buildings?

Yawata has another treasure: bamboo.

The globally famous inventor Thomas Alva Edison collected bamboos from around the world and experimented with them for use as filaments to put his incandescent light bulbs to practical use. He finally found that a filament made of bamboo from Yawata lasted for the longest time.

I think this may have happened by grace of Hachiman-san. On Mt. Otokoyama is the Thomas Alva Edison Monument, where the anniversary of his birth is celebrated every year. With an Edison Street, Hachimangu shrine town is truly a town of friendship with the world.