Origination of the Shokado Bento (boxed lunch), which embodies the spirit of tea ceremony 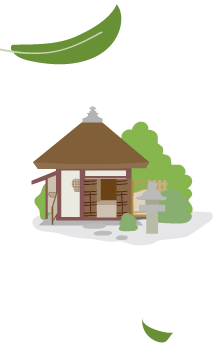 Yawata is the birthplace of the Shokado Bento.

The calligraphic work with flowing beautiful characters and the painting depicting a charming living thing shown below are works by the same person.

The artist was Shokado Shojo, active in the early Edo period.

Shojo was a Buddhist priest of Takimoto-bo Temple within the orbit of Iwashimizu‐Hachimangu Shrine, but he was also a famous person of culture, talented in arts, including calligraphy and painting.

My hobby is performing tea ceremonies, which enable me to communicate with wonderful people and experience the beauty of wabi-sabi, aesthetics unique to Japan. In the Kan’ei era when I am alive, the aesthetics of kirei-sabi, a combination of wabi-sabi and brilliant elements, is all the vogue.

I created boxes of this type, inspired by peasants’ seed boxes. I thought that, if lacquered and decorated, boxes in this form would be ideal for use at tea ceremonies. Don’t you think so too? I used the boxes as containers for tobacco or paints.

Around the Meiji and Taisho eras, some hundreds of years after Shojo’s time,
the Shokado cottage and the Shoin building of Izumi-bo Temple, where Shojo had lived, were reconstructed at their current locations, and this event evoked the public mood of honoring this person of refined taste.

Persons of culture at that time formed a group called “Shokado-kai,” and established Taisho-ji Temple as home to Shojo’s grave.

Tea ceremonies were held around Yawata to share the yearning for the times of Shojo. On such occasions, Shojo-style four-part boxes were used as containers for dishes served at tea ceremonies.

Among the visitors to the Shokado cottage was Yuki Teiichi, the founder of the famous Japanese restaurant Kitcho.

He recognized the potential of Shojo-style four-part boxes, and carried out a series of improvements on the boxes to remake them as containers for dishes served at tea ceremonies.

Cross-shaped parting strips prevent the flavors and aromas of ingredients from affecting each other. Enabling us to enjoy dishes through our senses of sight and taste, boxes of this type are functional and beautiful at the same time.

That is how boxed lunches of this style originated.

This style was named “Shokado Bento” from respect for Shojo, and spread as an iconic style of boxed lunch in Japanese cuisine to the rest of Japan.

After the Heisei era began, it was decided that a Shokado Museum would be newly established in Shokado Garden.

People will feel happy to savor a genuine Shokado Bento in Yawata, the birthplace of the lunch style.

We called for cooperation from a Japanese restaurant, and, as an amazing result,

Enjoyed together with the view of the buildings related to Shokado Shojo, the garden adjacent to the tea hut, and the sophisticated dry landscape garden, Shokado Bento will surely have an especially delicious flavor.