Let’s explore the rich natural environment of the spot where three rivers join, on board an imaginary model airplane. 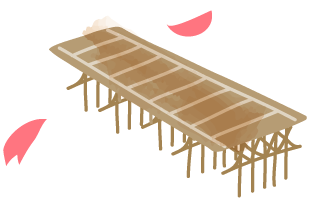 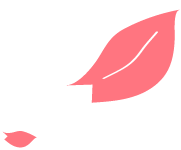 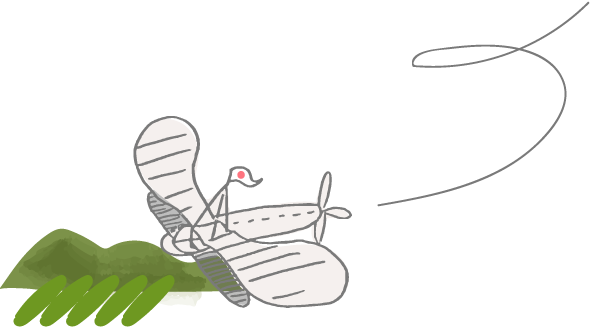 Yawata is where the three rivers meet

The Sewaritei bank is among the best spots for enjoying cherry blossoms in western Japan. While on the bank in spring, you can enjoy the pleasant breezes and cherry trees in full bloom arching over the bank.

The riverside with an esplanade is often lively with people who enjoy their holidays barbecuing, hiking or in other ways they like.

You can see a man enthusiastically observing birds over there. He is Ninomiya Chuhachi, an inventor.

How can a crow-type airplane inspired by bird shapes make a manned flight in the sky?

Chuhachi established the principle of aviation 13 years earlier than the Wright Brothers succeeded in the first powered manned flight.

I heard the news that the Wright Brothers had succeeded in the first flight when I was planning a trial flight on the bank of the Kizu-gawa River after waiting until the time was ripe. I was really disappointed to know they had done it ahead of me. . . I almost shed tears.

Regrettably, Chuhachi’s airplane was not put into practical use, but he is still respected as the “father of aviation in Japan“.

Let’s have Chuhachi guide a tour of the city of Yawata!

This is a jewel beetle-type airplane, designed for manned flights by improving the crow-type airplane! I dreamed of flying in the sky on board this plane.

The riverside area that Chuhachi thought was ideal for his trial flight has the rare geographical feature of three rivers joining to form one broad river. The Katsura-gawa, Uji-gawa and Kizu-gawa Rivers join together to form the Yodo-gawa River, which flows through Osaka.

Until the late Edo period, the Yodo-gawa River served as the main distribution artery connecting Kyoto and Osaka. The river was very busy with many boats, especially boats carrying pilgrims and supplies to Iwashimizu‐Hachimangu Shrine, according to some sources.

Moving along the Kizu-gawa River slightly upstream, you will see the landscapes shift to those of gardens where tea called “hamacha” is grown. Hamacha is cultivated by covering tea trees to adjust their exposure to sunlight. Harvested hamacha is processed into tencha as the raw material of matcha, and high-grade tea varieties, such as gyokuro.

The wooden bridge connecting the tea gardens on both sides of the river is a “Nagare-bashi Bridge” with unfixed boards. The bridge parts excluding the piers are designed to drift when the river rises.

Leaving itself to the natural flow of the river, the bridge is truly of Japanese nature!

As a famous filming location for samurai dramas, the bridge features a nostalgic atmosphere. The sunset view there is especially beautiful.

The imaginary airplane circles around to head toward the Sewaritei bank. Let’s drop in at Hiko-jinja Shrine, that is, a shrine to aviation, featuring a shining silver torii gate and a shrine building with stained-glass windows.

I built this shrine on the site of my house in Yawata, with the hope of the safety of aviation. People involved in aviation, from those in the airline industry to space developers, often made pilgrimages to the shrine. Many people also visit this shrine to pray for succeeding (“ochinai”) in examinations like never-falling (“ochinai”) airplanes.

The three rivers created by Mother Nature have always been part of the history of Yawata. The rivers relax people with the flowering cherry trees along them, tea grown by their blessings, and their rich natural environments.

Running along the cycling road on the riverbank is also a recommended activity on sunny days.