What did a kirei-sabi-style tea hut in the air as a fashionable spot in the Edo period look like? 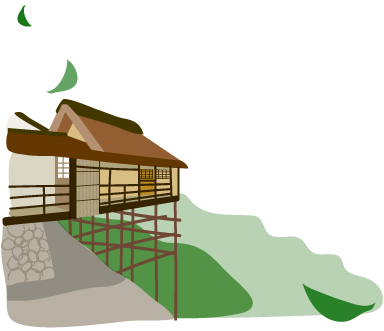 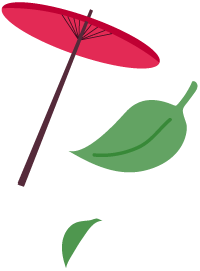 The story dates back to the early Edo period.

A large number of Buddhist temples stood in rows on Mt. Otokoyama, home to Iwashimizu‐Hachimangu Shrine.

Among them was Takimoto-bo Temple, whose chief priest, Shokado Shojo,
was a top-class person of culture, good at all kinds of arts, including calligraphy, painting and tea ceremony.

He received a visit from his closest friend, Kobori Enshu,
a samurai-cum-tea master who is credited with the aesthetics of kirei-sabi (gracefulness and simplicity) and who was renowned for his great expertise in castle building.

Enshu-san, you are busy rushing around the country to build castles, aren’t you?

No, no, Shojo-san. I know your duty of serving as a bridge between the Hachimangu and the shogunate is very stressful.

It would be fantastic to savor delicious tea while enjoying wonderful scenery at such a time.

A tea hut on a steep slope with the floor seven meters above the ground, which could provide a panoramic view of Kyoto!

It was a tea hut in the air named Kan’unken!

The hut looks like floating on a cloud. I name it Kan’unken (a hut of quietly floating clouds)!

My technique in building stone walls was used to construct the hut. It will amaze everyone!

It is said that, featuring a combination of wabi-sabi advocated by Sen no Rikyu and a brilliant kirei-sabi design unique to the Edo period, the tea hut served as a highly fashionable cultural salon where many persons of culture came together.

Regrettably, Kan’unken was destroyed by fire in 1773, but you can find traces of the hut in the city of Yawata.

There is a tea hut modeled after the tea hut in the air.

There is a faithful reproduction of Kan’unken, though lower than the original.

There is also my grave.

You can enjoy a panoramic view of the Kyoto Basin!

Tea culture is deeply rooted in the local communities in Yawata. The city is dotted with tea huts and rooms in addition to the before-mentioned ones, and tea ceremonies are often held there.

In Shokado Garden, you can also see another tea hut named Baiin! It is inspired by the aesthetic taste of Sotan, who founded the three major schools of tea ceremony collectively called San-Senke.

Chikuin, the other tea hut in the garden, is used to hold simplified Sunday tea ceremonies, which are popular with tourists.

The recent focus of the attention of tea ceremony participants is Hamanokaze, matcha made of the Yawata City-produced tencha variety of tea.

Hamanokaze is a branded tea, 100% grown and processed in Yawata.

Shojo and Enshu created a tea hut filled with playful imagination and the spirit of hospitality.

If they were alive at the present, they might create a highly stylish tea hut with state-of-the-art technologies.

The local communities in Yawata have handed down the chic and rich spirit of tea ceremony.